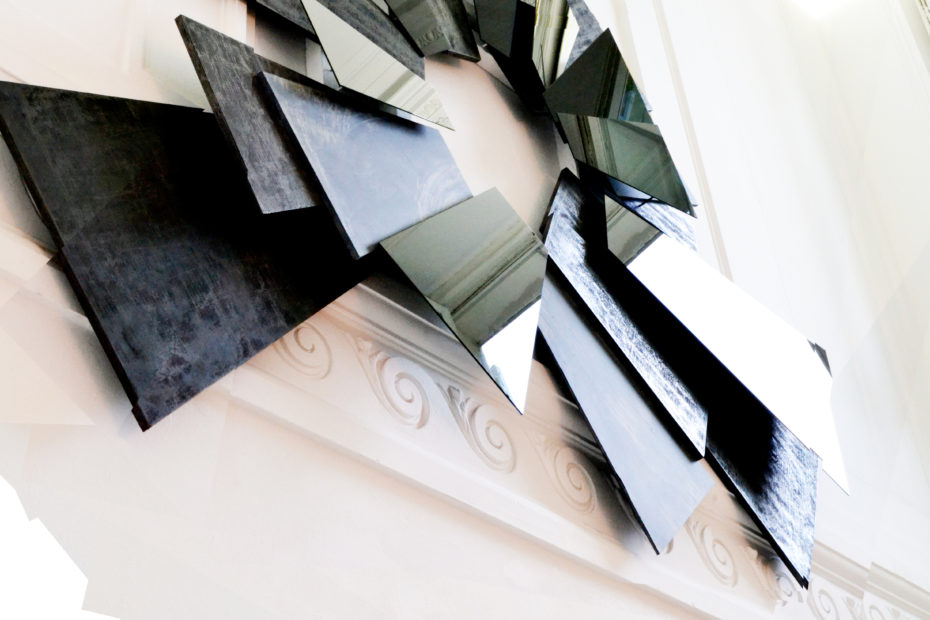 (a dark kairological framework)
The set is inspired by the landscape mosaic, ‘Titan Descent’, an assemblage of photographs transmitted to Earth by the Cassini-Huygens probe from the largest moon of the ringed planet Saturn (aka the mythic Kronos – god of time). Materializing as an aggregate of graphite coated wood, black mirror, and raw Ligurian slate, together they question the cultural codes that manufacture the local world around us.

Titan emerges as an inverted frame, decentering its own coordinates, substances and feedbacks. The “dark kairological framework” proposes itself as an attenuator of subject positions: presenting fragmented perspectives, multiple dimensions of time-space, and potential locations and proximities therein. This fractal and geological manifold stirs against the current(s) of crises that compromise our position as mere observers in a wildly unknown and blindly constructed world. “Titan suggests that the greatest challenge we face is our flat, one dimensional reading of temporal contexts – unaware of our own echoes.

Opaque quantitative horizons trap entities within a narrow state of infancy, and metabolize an organisms
memories and possible lucidity. A transparent, directionally protracted existence is what transgresses the limits, directions and momentums of the lightcone – the omniscient cosmological barrier.

Interested in the processes and techniques used for the visualization of celestial bodies and the production of extraterrestrial images, understood as the creation and development of different subjective modes in the third millennium, Jol Thomson is attracted to unusual galactic structures that emerge as a result of complex stratifications.

It is through these multiform “mosaic” processes that it is possible to articulate a new frame, or visual. It is Jol’s belief that a new structure also requires new archetypes and new ways of observation. This is where science and language meet their mythical origins.
The artist offers the viewer obscure geological surfaces inserted in an extraterrestrial frame to encourage us to reflect on what might be outside the territories of thought, the persistence of topics and the duration of knowledge. In this sense, one could read this work as a frame upside down, almost a sort of reversal of perspectives, as in Piero Manzoni’s Base del mondo.