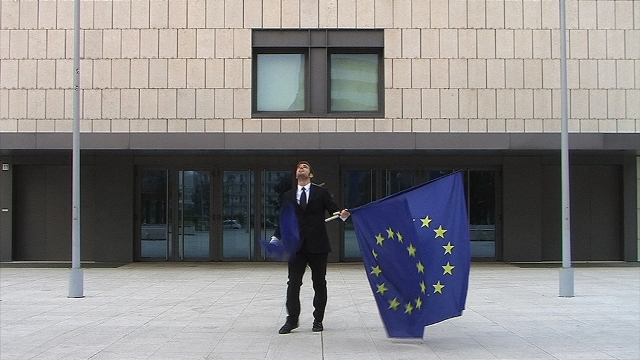 NoiSeGrUp presents at CHAN his latest video, L’Europe. The video documents a performance in which a color guard waves the flags of the European Union in the outdoor spaces of a bank.
The act refers, through a symbolic object such as the flag, both to the financial games that drive the Union’s policies and the urgency of rethinking the identitary dimension of Europe.

The European flag was born in 1955 on the proposal of the European Council, “it consists of 12 golden stars set in circle on a blue background” and became the emblem of the Union in 1985. The flag is not only “the symbol of the European Union, but also of Europe’s unity and identity in general. The stars symbolize the ideals of unity, solidarity and harmony among the peoples of Europe. Too, the circle is a symbol of unity, but the number of stars does not depend on the number of member countries. “

The flag is on one side only a piece of cloth and at the same time one of the cultural products of the most powerful symbolic value, so much so that some countries provide for sanctions against those who do not “is” properly. Hang it, burn it, play it, edit it, paint it on a canvas, every action involving a flag is loaded with more or less explicit meanings, but of ideological value. In contemporary art, starting from famous examples such as Jasper Johns, the flag recurs like a mantra, to remind us how sometimes symbols can also be inane.

The action performed by NoiSeGrUp focuses on this common symbol, to put it at the center of a “hoax” that reveals the manipulability and the fragility of the ideals underlying a political project of which we are often unaware. The new wave of anti-Europeism arise as demagogic movements that lack a real project of renewal and reform of the European reality. The diminishing confidence in the European model and the economic system that represents, gradually deprive its flag of all positive values that it should cherish. The color guard was originally a soldier that using his ability with flags had to scare the enemy and prove all the greatness of his army.

L’Europe is part of a series of works that NoiSeGrUp has realized in recent years, aimed to address economic issues related to the European Union. Untitled(Shooting Stars) consists of a flag on which the stars have been removed; in One a penny – symbolic of the common currency – has ben inserted in the middle of a small flag; Shooting Stars recalls the shape of a star to show, such as through glimpses, images of dissent and protests that have spread across Europe in recent years and the video Blue turbulence refers to the turmoil and instability that have passed through the European Union in 2012.

The 9th of May, the day of the opening, coincides with the Europe Day, a celebration that reminds the “Schuman Declaration” on 9 May 1950, on which the foundation for the subsequent process of European integration lay. An anniversary that only few know about and that leads us to question our identity as Europeans and the real creation of a EU dimension.