Viviana Milan – SO FAR FROM PARADISE SO CLOSE TO PARADISE 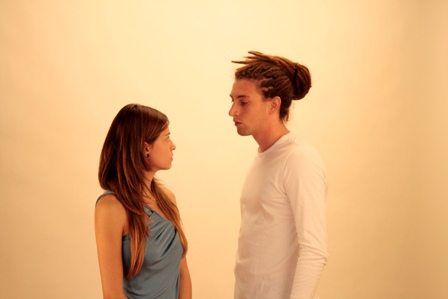 The project conceived for Chan’s space aims at showing two new works by Viviana Milan which focus on the themes of time, rite, and the sacred.
The title of the exhibition refers to the extremely frail relationship between a living thing and a lost Paradise, which the artist revises in a short video and in photographic work.

The video “Study for Annunciation” (2009) is dedicated to the iconographic representation of the same name, transposed as a potential new present occurrence, through an intense and essential rethinking of the matter. The photographic series “Incipit” (2008) previously originates as a reflection on the act of ritual cleansing in different religions. Attention is placed on the gaze – turned upwards and towards the light – of the models called to perform gestures of the sacred.

Both works reflect on the visual separation between heavenly and terrestrial events and moreover on the formal differences between high and low, the sublime and the physical. They attempt to find a possible union which underlines the “ territory of time” that is produced between the visible and the invisible.
Plato considered time as a connection between the Divine and the Human, just as the announcement of the Incarnation indicates for Christians the coming of God in this world’s time.
In Viviana Milan’s work, fiction replaces the real, like an absolute presence substitutes its hidden “laterality”, in a coexistence of opposites between the being here and the not quite being here.

The catalogue includes a text by Natalino Bonazza, lecturer of Theological aesthetics at Studium Generale Marcianum in Venice.

Viviana Milan focuses her artistic research on time, on its visibility and multiplicity. Her work develops through a contemporary reading, which draws attention to rites and transforms actions, objects, and people in the same consciousness that creates a threshold of tension, expectation, and liberation of time.