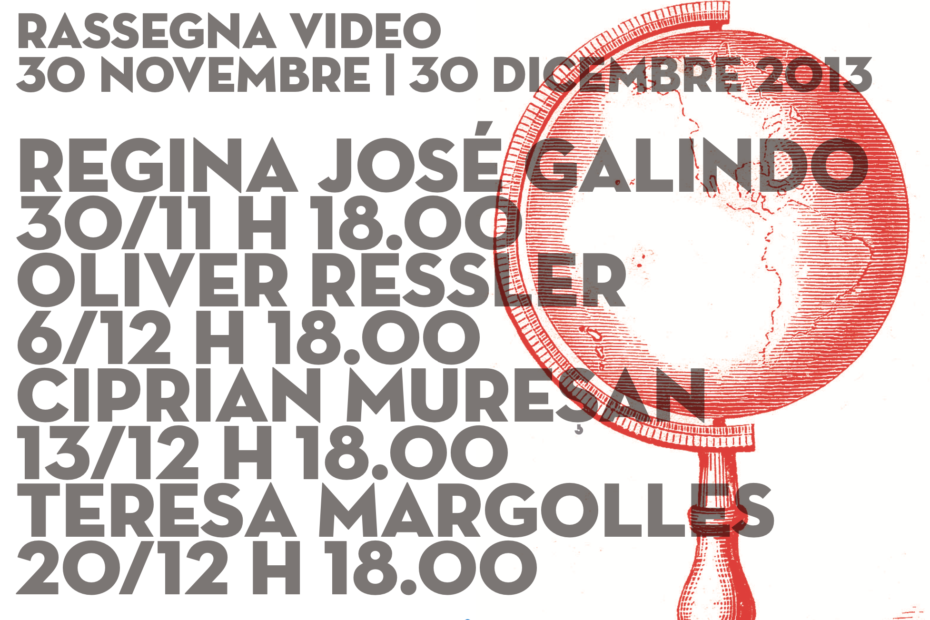 GLOCAL TALES, video review curated by Francesca Guerisoli develops in four solo exhibitions of Regina José
Galindo, Oliver Ressler, Ciprian Muresan, Teresa Margolles.
Coming from different contexts – from Guatemala to Austria, from Romania to Mexico – the
artists of GLOCAL TALES are related each others by a clear stance on the political and social
reality of specific contexts, as well as by a critical approach about the global market and finance
dynamics that impact locally. Considering art as a political action that aims to trigger and
contribute to social change, using the video in a different way, the four artists work on the

relationship between life, human rights and the arts, address the issues of violence related to
political and economic power. The videos of GLOCAL TALES are focused on particular local
circumstances that relate to the global situation, telling in a different way the political, social,
economic and financial conflict of which the authors are direct witnesses: from the memory of
the victims of the armed conflict in Guatemala and the stance against the presidential
candidacy of Efrain Rios Montt, to the political relationship between individuals (Regina José
Galindo); from the social unrest in Britain on August 2011, to the post economic and financial
crisis (Oliver Ressler); from the condition of the individual and the masses as a political entity
powerless in Romania, to the image of the glory of the army become trivial (Ciprian Muresan);
from the femicides in Guatemala City in those border towns of Mexico (Teresa Margolles).
GLOCAL TALES begins on November, 30th with Regina José Galindo, ¿Quién puede borrar
las huellas?, 2003 and Paisaje, 2012. Il will be continued on December, 6th with Oliver
Ressler’s videos Robbery, 2012 and The Bull Laid Bear, 2012 (made with Zanny Begg); 13th,
with Ciprian Muresan’s videos I’m protesting against myself, 2011, and Untitled – Poteto
Peelers, 2009, and finally on 20th Teresa Margolles with Mujeres bordando
junto al Lago Atitlán, 2012 and ¿Cómo salimos?, 2010.